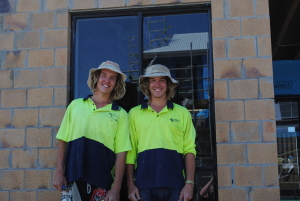 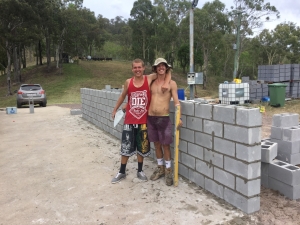 In 2016 as a taste tester for possible future competition expansion, Masonry Contractors Australia will trial a team at the Fastest Trowel on the Block event.

Worldskills regional campion Jack Sommerfeld & Patrick Sommerfeld, have been selected to represent Australia in Las Vegas at the World of Concrete, 3rd of February 2016 to compete in the MCAA Fastest Trowel on the Block competition.

Jack won at the regional Qld Worldskills at Mackay 2013

Pat won at the regional Qld Worldskills at Rockhampton 2015

Jack won at the regional Qld Worldskils at Gold Coast 2015

The team received official confirmation on the 23rd December, so during Christmas break the team have been training or working out how the team are going to win. The team requires an area of about 10 metres long and 4 metres wide to practice. First training run this morning 24th December, Jack laid 115 blocks on first attempt. The team are only talking winning, not second.

“It is a totally different comp. than World skills, the Nationals are held over 2 ½ days, International over 4 Days, and then compare 20 minutes for Fastest Trowel on the block in Las Vegas @ 20/20 Blocklaying. We are trying to encourage and retain young people in our industry and hopefully the team can showcase this”

In 2013 a QLD team from Townville competed. Australian masonry contractor Sommerfeld & Sons managing directors Colin and his wife Karen attended that event to support the team. The winner, an American won with 117 blocks

A Media launch is anticipated 23rd of January 2016. The team will be showcasing training exercises required to compete in Las Vegas at the ‘Fastest Trowel’ on the block competition.

Our “Brains Trust” all over Australia are helping with our planning and strategies as it is only a 20 minute competition, so we have to have this perfect to win.

MCA is committed to supporting the training and retention of masonry tradespeople. Masonry Contractors Australia strongly supports the need for engagement of quality key industry partners for the continual improvement of skills.